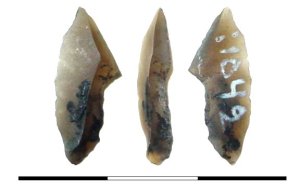 Scientists in Estonia, using infrared spectroscopy, have been able to identify the adhesive used to glue an early Mesolithic microlith to its wooden shaft as birch bark tar.  Their sample came from an excavation at Pulli and was found together with a lump of the same adhesive with teeth marks where it had been chewed.  Read details here http://www.primitiveways.com/birch_bark_tar.html

Birch bark tar has long been known as the ‘superglue’ of the stone age.  It has been found on a Neanderthal spear point, with a thumb print. Pieces of chewed
birch bark tar with human teeth marks go back as far as 11,000 years. Otzi’s
5,300 year old copper axe was hafted with birch bark tar. 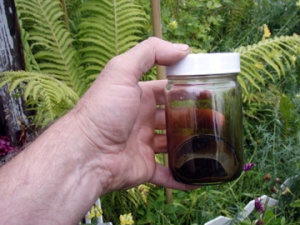 Visit The Museum of The Stone Age: http://www.stoneagetools.co.uk